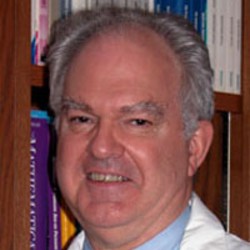 Contact by email
Lawrence G. Hunsicker, MD, is medical director of organ transplantation and professor of internal medicine at University of Iowa, College of Medicine, Iowa City. Dr. Hunsicker graduated from Yale College, New Haven, Connecticut, and received his medical degree from the College of Physicians and Surgeons, Columbia University, New York City. He completed his internship at Roosevelt Hospital, New York City, and his residency at the US Naval Hospital, St. Albans, New York. At the Naval Hospital in Portsmouth, Virginia, Dr. Hunsicker held the position of chief in the Renal Branch, Department of Medicine, and chair of the Department of Clinical Investigation.
Dr. Hunsicker’s research has focused on the areas of progressive renal disease, transplantation medicine, the design and performance of clinical trials, and the analysis of large national medical databases. In 1979, he and Dr. Edmund Lewis of Chicago founded the Collaborative Study Group (CSG), a consortium of nephrologists that now has members worldwide. Dr. Hunsicker is a member of the CSG Executive Committee and principal investigator of the Data Center for the Type 2 Diabetes Study.
Recently appointed chair of the United Network for Organ Sharing/University Renal Research and Education Association (UNOS/URREA) Data Working Group, Dr. Hunsicker is also the principal investigator for the Economic Special Studies Center of the United States Renal Data System. A founder and past president of the American Society of Transplantation, he was awarded the society’s Roche Lifetime Achievement Award. Dr. Hunsicker has served as president of the American Council on Transplantation, National Kidney Foundation of Iowa, and UNOS. He was a regional president of the National Kidney Foundation, the first medical advisor to the American Organ Procurement Organization, and a member of the Department of Health and Human Services Secretary’s Advisory Committee on Organ Transplantation. Dr. Hunsicker has been a member and chair of numerous National Institutes of Health study sections.